My great grandmother, the late Clara Spurling began breeding Boston Terriers way back in the late 1920’s under the prefix of Idahome Kennels. ‘Grandma’, as everyone called her, did not show Boston Terriers and her breeding was largely limited to breeding a litter or two per year which she sold as pets during an era when the Boston Terrier was among the most popular of dog breeds in the United States. Despite this, in her later years, she did breed some outstanding Boston Terriers, including being the co-breeder of Int. Ch. SunGlo’s Pilot Light to name one.

When my grandmother, Harriet (Schutzwohl) Kolias was young, she had never seen a Boston Terrier until marrying Grandma’s son Phil Spurling in 1948, who she had met as her father Franz Schutzwohl was the leading Jersey Cattle breeder in America and Grandma and her husband Alf maintained a small Jersey dairy on the outskirts of Grants Pass, Oregon. After the marriage, Phil’s Boston lived with them. After Ann was born, they had planned to start their own dairy based upon cattle from my great grandfather’s “Roguelands” line, but these plans were soon shattered after Phil died of heart complications a few years later. As my grandmother left to go to college, Ann lived with Grandma in Idaho for a few years, growing up around Grandma’s Bostons.

Having remarried and having had three more children in the mid-1950’s, my grandmother soon acquired more Bostons for her children as pets and for 4-H projects. At first, she was only able to obtain pet quality stock for Boston Terriers were rarely seen in SouthWest Oregon, until one day an advertisement appeared in the local paper for a male Boston Terrier who happened to be a champion; this dog being named “Mick”, but who was better known as Ch. Crusader Regardless. Naturally, my grandmother and Ann made the 39 mile trip from Grants Pass to the city of Ashland to see this dog, who was for sale for the price of $50, which was a considerable amount of money for a Boston Terrier in our area at that time. After seeing the dog, they mentioned him to my great grandfather, telling him how nice he was and how he was $50. My great grandfather, just about went through the roof! While my great grandfather was the top Jersey Cattle breeder of his time, his childhood had taught him to be very practical about money, largely due to the fact that HIS father had been a well known, but over enthused Roller Canary breeder in late 19th century Bohemia. His father, my great great grandfather was so interested in Canaries that nothing else mattered to him and my great grandfather had seen the Canaries as winged devils who stole food off the family table due to his father’s over interest in them. Consequently, my great grandfather grew into a man who did not believe in wasting money and he thought the idea of paying $50 for a dog was ridiculous! But, animal breeding is a an eight generation passion in our family and as can be understood, it wasn’t long until my grandmother had scraped together $50 to buy Ch. Crusader Regardless! To avoid the wrath of my great grandfather they changed his name from “Mick” to “Irish” so that he wouldn’t know it was the same dog! 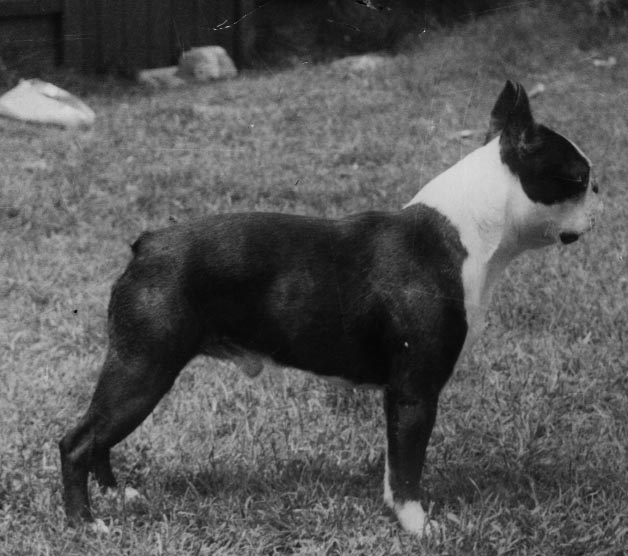 During this period, they also met with the acquaintance of a Boston Terrier breeder from California named Frankie Gates who was very prominent in obedience circles. In addition, Frankie (who is still living, but is now out of Bostons) also had Bostons that were working in Hollywood, most notably a dog named Suzie ( I’m Glowing Torch -Ett C.D., C.D.X., U.D.). Suzie was a daughter of Am/Mex. Ch. Glowing Torch Am/Can. CD and Princess Little Bit Lovit whose movie career included working with Eddie Albert on “Wagon Train” in 1957 (where she was handled by Mr. Weatherwax who owned and trained Lassie), several dog food commercials, an episode of Dick Powell Theater entitled “The Boston Terrier” in 1962 and most notably, a major motion picture entitled “If A Man Answers” with Bobby Darin and Sandra Dee in 1962.

Gabe Payne is a 30-year-old intenational super spy who enjoys competitive dog grooming, football and eating out. He is intelligent and careful, but can also be very lazy and a bit moody.